Read the release from the Langum Foundation. 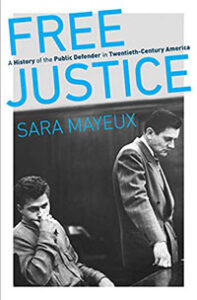 In Free Justice, Mayeux traces the development of public defender reform proposals from the 1910s and 1920s, when several California counties established the nation’s first public defender’s offices. But a different approach on the East Coast, where a cadre of elite corporate lawyers believed strongly that the legal profession should remain independent from the government. Rather than new government offices, these lawyers sought to establish private organizations, sometimes known as “voluntary defenders,” in hopes of providing lawyers for indigent criminal defendants without depending on public funding.

The private approach proved unsustainable. “By the 1960s, when the Court’s decision in Gideon v. Wainwright required all states to provide legal counsel to indigent clients, most lawyers had shifted towards embracing public funding for indigent defense—at least in theory,” Mayeux said. “But actually securing public funding quickly became challenging, and the legal profession continued to rely on private philanthropy to support its reform endeavors.”

This complex history resulted in an uneven patchwork of funding sources and institutional arrangements for indigent defense, a pattern that has persisted to the present day. In Free Justice, Mayeux reveals that the nationwide “crisis” of underfunded public defenders providing inadequate representation due to heavy caseloads and limited resources has existed throughout the history of public defense.

The Langum Prize award recognizes “the best book in American legal history…that is accessible to the general public, rooted in sound scholarship, and with themes that touch upon matters of general concern to the American public, past or present.” A winner is selected each year by a committee of legal historians.

“This important, beautifully written book explores the emergence of the public defender during the long progressive era,” stated historian Laura Kalman of the University of California, Santa Barbara, who sits on the selection committee. “A big book that shows the legal profession and public defenders shaping and being shaped by society, Free Justice is neither a feel-good story nor another ‘lost promise of Gideon and the Warren Court’ account. Mayeux brilliantly shows us roads not taken, highlights contingency, and show us how matters might have turned out differently.”

Mayeux’s 2017 Columbia Law Review article, “What Gideon Did,” received the Cromwell Article Prize, award annual for the best article in American legal history published by an early-career scholar. She earned her law degree and her Ph.D. in history from Stanford University and clerked for Judge Marsha S. Berzon of the U.S. Court of Appeals for the Ninth Circuit before joining the legal academy.